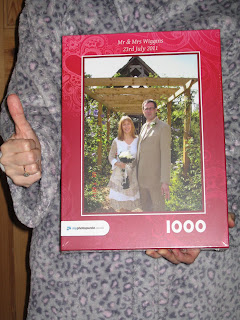 A lovely shot of me modelling my presents.

What an exciting day on the delivery of surprise presents front!  Two presents.  Yes two.  I am a lucky bunny (OK maybe not lucky in all departments but in the unexpected gift arena I reign supreme).

Just as I was about to leave for my first dose of chemo (more on that later, there is no escape) a lovely dressing gown arrived from the Gang of Four (A, H, J, and J).  I think they were so appalled by my description of my frankly revolting dressing gown that decided I needed a replacement.  They were right.  I love it!  Thanks.

Then much later in the day, as I was lying on the sofa feeling slightly queasy, the other-half answered the door and guess what arrived.  A jigsaw.  Now a jigsaw is jolly exciting in its own right (obviously) but this one’s special because it’s a picture of the other-half and I on our wedding day last July.  This time (unlike the cat harness incident) I’m confident in saying that this is from MM.  Thanks MM, I never knew that you could get personalized jigsaws (I’ve lived a sheltered life) and am terribly impressed.

However, I'm sure you won't be surprised to learn that the other-half managed to steal the show during chemo.  He sat with me while the chemo was administered and the nurse, at one point, was talking about veins.  She then turned to the other-half and waxed lyrical about how good his veins looked.  He loved it.  Typical!
Posted by Disco Del at 18:59