The quilt of guilt


Building work has started on Discombobulated Towers, you should see the mess.  Predictably enough we’ve already run into a problem.  It turns out that one of the kitchen walls had been built on jelly or a plague pit or something else equally gooey and now has to be rebuilt.  Good start.

I’m happily ensconced at Sis No 1’s house for the duration of the building work.  I’m not so sure that Sis’s cat, Tuppence, is particularly happy about the ensconcing though.  Cyril (my three-legged monster cat) is being a thug, chasing Tuppence and stressing her out.  He is  an ASBO cat.  On the first day of our stay someone peed on my sister’s bed.  The jury is out as to whether this was Tuppence, Cyril or the Other-half.  Strangely, no-one seems keen on taking up my suggestion of DNA testing or calling in CSI Shrewsbury to unmask the culprit.  When we dropped the quilt off at the cleaners, we quickly exited the premises without mentioning why it needed cleaning.  The nice lady behind the counter will have a bit of a surprise when she opens up the bin bag containing the quilt.  I’m a bit scared about going back to collect it.

I had my radiotherapy planning appointment today.  This involved a woman with extremely cold hands drawing all over my chest with a biro, running me through a CT scanner a couple of times and then tattooing me.  Now I’m all ready for the zapping process which will start in April and will mean a trip to the hospital everyday for three weeks.  Everyone assures me that radiotherapy is easy-peasy in comparison to chemo.  We’ll see.  I should think it’ll probably make me too ill to go to collect the quilt though, don’t you?
Posted by Disco Del at 20:14 No comments:

See that picture?  That’s the correspondence I’ve had with the tax office over the last six weeks.  It’s a long and dull story best summed up as they are doing my bloody head in!  I am battling on and think I might be wearing them down as the latest letter from the powers-that-be said, amongst other things, that they were ‘sending me kind thoughts’.  Sweet, but I’d prefer it if they just got my tax right.

I’ve got a seroma (collection of icky fluid at the operation site).  Maybe don’t click on that link if you’re about to eat.  Too late?  Oops sorry.  I had the fluid drained on Friday by the surgeon but by Friday evening it was back.  I thought I was tremendously brave putting up with it all weekend and called the hospital on Monday morning expecting them to rush me in to mop my brow and drain the gunk.  They were unimpressed.  I have to wait until Wednesday to get it drained again.  Meanwhile I’m walking around with what feels like a small water bed on my chest.  This in turn has put the kibosh on my radiotherapy planning appointment (also scheduled for Wednesday).  I spent all day yesterday (apart from the two hours I spent composing my latest letter to the tax office) trying to phone the radiotherapy department to reschedule my appointment.  The phone rang and rang and rang and rang.  No-one answered all day.

I’m still pathetically tired.  I walked for 10 minutes yesterday, had a major (and embarrassing) coughing fit in the post office then walked 10 minutes home and had to have a lie down.

I’m persisting with the grotty post-mastectomy exercises as instructed by the physiotherapist.  They hurt and make me even grumpier.

Building work on the kitchen starts on Monday.  There is still So Much To Do Before The Work Can Start.  And Cyril (three-legged monster cat) is not helping much with the packing. 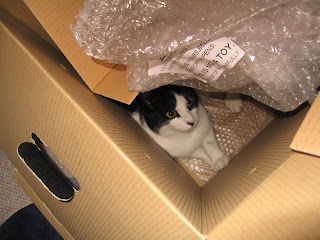 To cap it all I’ve opened a new tub of margarine when we already had an unfinished tub in the fridge.  Argh.  As John Shuttleworth says 'two margarines on the go, it's a nightmare scenario'.  See below for his musical masterpiece:

With all the ranting I forgot to update you on my recent surgeon and oncologist appointments.  The surgeon is happy with my progress (the seroma problem is common and nothing to worry about).  Sufficiently clear margins were taken out around the tumour so I don’t have to have more surgery.  The main tumour itself was a bit smaller than expected and the other cancer in the breast found during biopsies a year ago was nowhere to be seen.  The surgeon suspects it was zapped by the chemo.  The oncologist (the one that looks like Smokey Robinson, he’s my new favourite) decided I should have radiotherapy because, although it will not help with secondary cancer, it can reduce the risk of a recurrence of a new cancer in the same area as the first.  So pretty good news all round.  I really shouldn’t be so grumpy, but I am.


My life is still revolving around the sofa.  I’d no idea that having an operation would make me feel so tired.  I’ve read bits and bobs on recovering from a mastectomy and there is every shade of opinion from people who think that, at two weeks on from the op, I should be leaping around like a young and frisky gazelle to others who reckon I’ll be out for the count for up to six months (six months? bugger off).

Apart from the tiredness all seems to be going well.  I am (as yet) untraumatised by the whole thing and while I’m in a bit of pain it’s not horrendous, nothing like having toothache or, as I can bloody well testify, stubbing your toe by walking into the clothes airer with bare feet.

I’m sorry for the extra dull post but I’ve very little to report (aside from the horror that is walking into the clothes airer with bare feet).  However, during a period of intensive research (which some people might mistakenly call faffing about on the internet) I found the only source of information anyone will ever need.  Click here to find the most useful database* in the universe (click on the dots within the table for pictures/films).

Snoozing on the sofa

I'm back home, being pampered by the other-half, getting meals on wheels from sis no 1 and more cards, phone calls and flowers than I deserve:


I had a couple of fantastic handmade cards, one of which was covered in glitter.  The other day Cyril (three-legged monster cat) brushed against the card and was immediately coated in spangles.  Then he went outside to hang out with his rufty-tufty mog-mates.  I was worried that he'd get beaten up for being so flamboyant, but he strutted home (as best a three-legged cat can strut) in fine fettle.  I think perhaps he is a fashion-leader, so now I expect to see the other neighbourhood cats sporting glitter encrusted coats too.  It's the new spring look.

Anyway, I'm home from hospital and and am now officially an amazon.  Admittedly I'm a bit of a delicate amazon at the moment but I'm on the mend and making the most of sofa time before a truck load of hospital appointments next week.

I'll be pestering you again shortly but thought I'd let you know that as I drifted in and out of sleep after returning from the operating theatre (where I'd just lost* a breast) I could hear the other-half droning on and on to the nurse about his backache.  No-one suffers like he does.