And another thing (or five)

Fear not gentle reader I'm not in quite such a fuckity-fuck-fuck mood as last time.  On the other hand I'm not promising puppy dogs and glitter either.

What I can promise is a brain dump.  You poor sods.  Right, let's go.

And other thing (or five)

1.  I have been out and about enjoying the fresh air since my last post.  Spring has most definitely sprung even if it means dodging big bastard rain clouds. 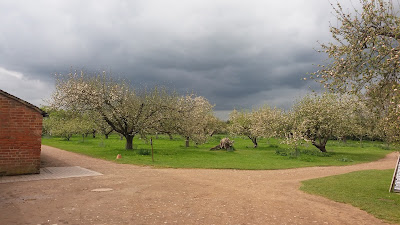 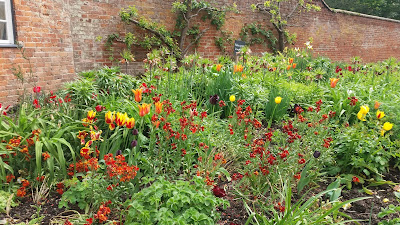 2.  I had further argy bargy with my local hospital when they tried to defer my hard won appointment with the oncologist so that, wait for it, fucking useless breast care nurse (FUBCN) could be present.  I went loopy.  Suffice it say the appointment was NOT deferred and I refused to have FUBCN present.  (If you can be arsed to read the background to all this, see my last post which was all about health service fuckwits).

I have submitted a formal complaint about everything to the hospital's Chief Executive.

The appointment with the oncologist went better than I expected.  I said my piece.  She apologised.

A CT scan had been requested but had been lost in the system.  She could not explain why no-one had realised this and it was left to me to raise the issue.  I will be having a CT scan in mid May.  Still a long time to wait but the best that can be done.

She had also asked for a follow up appointment to be made to see her.  She could not explain why I was told otherwise.

I have a new point of contact for the hospital.  An oncology nurse who I already know and like from my chemo days.  I will never have to speak to FUBCN again.  Pauses for big cheers!

A physical examination revealed nothing new and scary.  My lungs sound the same.  Neither better nor worse.

I came away feeling somewhat mollified and reassured.  Nevertheless my formal complaint will stand.  Let's face it, they really fucked up.

3.  You may have heard that there was a fire in Manchester at a research centre adjoining The Christie.  This could mean the loss of research work done and is a worry for everyone concerned about research into many types of cancer.  An appeal has been set up by the Manchester Evening News and is Manchester focused in it's write up but really this research has world wide impact.

4.  Yesterday the BBC and lots of other tv, press etc ran a story about the Cancer Drugs Fund (CDF) saying that the fund, which used to provide cancer patients with drugs not available straightforwardly on the NHS, was a complete waste of money.  The reporting was awful.  There was a clear implication that cancer patients were playing fast and loose with public money and should basically shut up, fuck off and get on with dying.  The CDF certainly wasn't without it's problems but this gives a bit more of a balanced view.

5.  Please don't think I've gone all mellow. I'm still enjoying my massively bed temper.  There are ongoing chemist problems (which I can't bear to go into you'll be pleased to hear).  When going to collect prescriptions the other half parks me in my wheelchair on the far side of the chemist to the pharmacy counter and goes and deals with them himself, such is his fear of me exploding with ineffective and squeaky voiced fury at the 'staff' there.  I am a human volcano!

Yesterday I had what is so far my worst day dealing with doctors, nurses, secretaries and just about any fucker involved with my so called care.  There is going to be more swearing in this post, so if you don't like that sort of thing, then best step away now.

First, to recap my current shitty condition.  I have been removed from the trial at the Christie due to breathing problems.  The Clinical Trials team there now have no interest in me whatsoever and, despite being told they would continue to help me, have on the two occasions I did contact them told me to contact my GP not them.  Message received.

After having been ill in hospital at the end of January, followed up with two weeks bed bound at home with  faecal impaction, my health had obviously deteriorated quite dramatically and I was not surprised, when I went to see my oncologist back at Shrewsbury in March (when I was finally well enough to get to an appointment) to be told that I was "very poorly" and could have have no more chemo as it would shorten my life rather than prolong it.

The oncologist did, as a last chance, prescribe a hormonal drug, anastrazole.  I haven't had much luck with hormonal treatments in the past but it's certainly worth a try.

When I saw the oncologist I asked for a CT scan.  She didn't seem particularly keen on the idea but agreed to arrange it and said she would see  me again in four to six weeks.

Thanks for bearing with me through the back story, now on to yesterday's shit storm.

As I had not yet had a date for either the scan or follow up appointment with the Shrewsbury onc, I rang and spoke to her secretary.  She informed me that the onc had NOT in fact requested a scan nor were any future appointments arranged to see her.  This is despite the onc agreeing to arrange both when I saw her, the other-half was also present, on 17th March.  The secretary was unhelpful.  She refused to pass my concerns on to the onc.  And could not make appointments for me.

Shitty secretary did explain that the onc had sent a letter (which nobody deigned to send me as usual) saying that my care had been passed to  the Palliative Care Consultant at the local hospice.  In fact, I already see her regularly.  It seems unbelievable to me that I should be denied oncology care (the hospice doc is NOT an oncologist) which actually taking a prescription prescribed by an oncologist with an aim to helping my condition.

Bloody Nora. I am under no illusion as to the state of my health.  I'm the sodding one on oxygen for the best part of every day .  However, I would actually like to receive proper care while I'm still around!

So that was the initial bombshell.

I then started phoning around like a demon trying to get all and sundry on my side to make sure I get a scan and proper care.  I rang the Hospice nurse and, for the first time, found her a bit crap.  She had, as promised, asked the hospice doc a week or so ago to put pressure on Shrewsbury Onc to arrange the scan.  But she doesn't know if this has been done and everyone is on holiday this week blah blah blah.

Next, I bravely phoned the fucking useless breast care nurse (FUBCN) who I usually avoid like the plague.  She has been absolutely crap since the day I was diagnosed.  But any port in a storm.  There were a few phone calls back and forward of increasing arsiness on both sides.  The Shrewsbury Onc is on hol all week.  FUBCN says she can't/won't arrange scan but will arrange for me to see onc as soon as possible on her return to work.  I asked how I would be notified about the appointment date.  The response?  "I don't know".  I said I wasn't happy, but would accept earliest appt.  I said as I wasn't happy my official complaint (which I had already submitted via the PALS system) would still stand.  "Well that's up to you" she snapped.  "I'm just letting you know" I said, equally angrily.  And that's how that it was left, with us more or less hanging up on each other.   The woman has no professionalism and certainly no idea of patient care or cutting angry, sick patients some slack.

Then I rang my GP.  It turns out he has a letter from Shrewsbury onc saying that following my last appt she WILL see me in 4-6 weeks (which is 1- 3 weeks from now).  Fuck knows what is going on.

Then some added shite.  The GP also told me that apparently I had been allocated a named (non clinical trials) Onc at The Christie, as I had requested when I came off the trial there.  I chased this up initially to no avail but had left it of late as until recently I didn't feel well enough to travel to Manchester.  However, unbeknown to me it had been decided, following a conversation between the Christie onc and the clinical trials doc there not to go ahead with the referral.  Clinical trials had already washed their hands of me and have not seen me since I was discharged after my hospital stay there, now it appears they may be blocking my attempt to attend the oncology clinic there.  This one may be a battle for another day.  I have to admit I only have so much energy.
.
In fact after spending all morning ranting on the phone, I spent lunch time ranting at poor Sis No 1 who had come round and got her ears chewed off in thanks.  Then I had a huge glass of port and lay down and thought about rainbows, kittens and the cost of hiring a hitman.  I recovered enough to rant at Sis No 2 who rang in the evening.  And had a most satisfying email from Sis No 3.  I quote her here.  I don't have her permission.  Go on, sue me.

This morning I received a first class letter informing me that I have an appointment with the Shrewsbury onc next Thursday.  I assume I was notified in this unusually prompt way so that Fucking Useless Breast Care Nurse doesn't have to actually speak to me.  Suits me.

And that's the end of my rant.  I am sick to the back teeth of trying to be nice and suck up to these sodding awful people, which has been my approach in the past.  From now on they can all fuck off to fuck off land and when they've come back from there they can fuck off right back again.