I’m starting the New Year in the traditional way, by feeling like a bag of bollocks.  I’ve been fighting off the lurgy for a few days but overnight my immune system waved the white flag and I’ve woken up with a streaming nose, hacking cough and total and utter grumpiness.

To make matters worse I think they’ve changed the recipe for Lemsip.  I used to love Lemsip.  It almost made having a cold worthwhile but now, due to an ingredient change, or the state of my chemo-altered taste buds, it tastes like a menthol/antiseptic cocktail that’s been mixed in a disintegrating hot water bottle, only worse.

The lurgy does have some consolations though.  I’ve got up early (to spare the other-half having to listen to me cough) and draped myself on the sofa while watching the 1953 version of The War of the Worlds on the telly and, best of all, am snuggled up under a really wonderful present.  This picture doesn’t do it justice, but look what a friend made me, a completely gorgeous quilt. 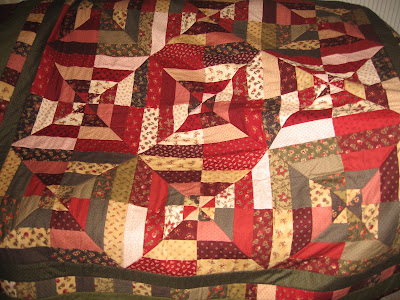 It’s in exactly the right colours for my sitting room, so even though I’m poorly, I'm colour co-ordinated.  I'm afraid I disgraced myself a little bit and came over all emotional when I was given the quilt but, honestly, what a beautiful gift.

Talking of wonderful things.  Christmas.  We had a real slap-up, no holds barred, rip-roaring Christmas.  I stayed in a very swanky house with lots of family and friends, including all three of my sisters.  It was a bit of a Downtown Abbey experience (only we were all very good and no-one behaved like arch-bitch Lady Mary).  Just look at where we had our Christmas dinner.

At the risk of sounding as my dad used to say, as soppy as a sack load of bottoms, it was a truly lovely Christmas.  Also, I've now got ideas above my station and won't step outside the front door unless I'm wearing a tiara.

We took the Christmas-cake-that-nearly-caused-a-divorce-in-the-making with us.  Amazingly most of it was eaten, probably due to the industrial quantities of sherry and brandy it contained.  When it came to cake decoration we decided to go with the true meaning of Christmas and had an Ice Road Truckers theme.  And here it is (another poor photo but you get the gist) 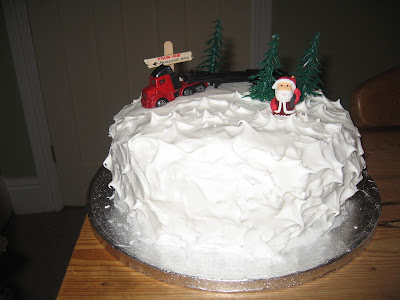 We are now taking orders for next Christmas.  Don't all rush at once.

Since Christmas, normality has returned.  I've come back to a dose of chemo with the usual temperature spike and trip to hospital the following day (New Years Eve).  All was OK and I was released after a thorough checking over, although I could've done without the four attempts to get a cannula in to administer IV antibiotics. 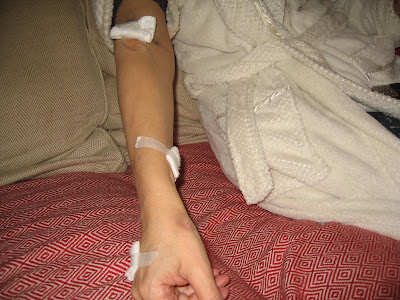 But for now I'm concentrating on lying on the sofa sniffling.  If anyone wants to buy shares in a tissue factory now's the time.

(Apologies if this blog post is displaying a variety of font sizes, I think my computer has the lurgy too).
Posted by Disco Del at 08:12 4 comments: