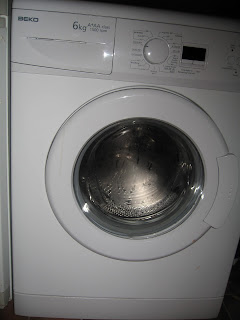 How's this for an exciting photo?  Come with me and I'll show you the world

Surely it’s perfectly reasonable to assume that a washing machine which is, correct me if I'm wrong,  designed to wash things would also clean itself?  Well apparently not, or so I was told this morning at some length.  The other-half loaded the machine today and took the opportunity to inspect it.  Apparently the dispenser drawer and drum were thick with filth and I am in disgrace.  On the bright side I am hoping that I will be deemed too irresponsible to ever take charge of the washing machine again.

In other news the after effects of Monday’s chemo still seem to be fairly minimal.  I’m wary of typing that in case it tempts fate and I’m struck down by everything on the scary hospital list.  But other than some queasiness, not sleeping at night but dozing during the day I don’t (thankfully) have a lot to report.

Whilst I’m talking scary I had to give myself an injection in my stomach today (one a day for six days to keep my blood count up).  I, true to form, worked myself up into something of a lather about it (just had to follow instructions I hadn’t had a trial run with a nurse or anything).  Anyway it seemed fairly straight forward, once push came to literal shove, and as soon as I’d done it I celebrated with tea, a hot cross bun and a snooze.

Much as it pains me to write something nice about the other-half after washing machine incident, he has been hard at work all day on the Cyril Proof Fence.  This was apparently very complicated.  I know because it involved a lot of swearing.  Hopefully it’ll be completed tomorrow (weather permitting) and the three-legged cat can be released into the garden once more to practice some more escapology.  Can you bear the excitment?  I'm not sure I can.
Posted by Disco Del at 18:50