Anyone want a cat? 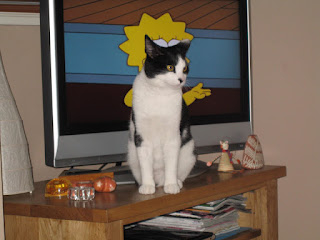 Not only does my three-legged cat, Cyril, have views about which TV programmes I should watch (see above for his disapproval of The Simpsons, stupid cat) but he has tried to escape again.

It was only a couple of days ago that I posted about the panic he caused me. Well this morning he did it again. This means that he is now under house-arrest until such time as we can get the height of the garden fence increased (by about 10 foot!) or employ full-time border guards.

While I’m writing about my endless trials and tribulations I should also point out that my post about the extreme youth of my oncologist has led to everyone (ie 4 people) I’ve spoken to about it deny ever having heard of the awful Doogie Howser TV programme, making me doubt my sanity. One friend even managed to get it slightly muddled up with Hong Kong Phooey – note to self: must get more intellectual friends. Anyway you doubters made me google and lo! - Doogie Howser DID exist (well the TV character did). Here’s the proof. I suspect you just blanked it out because the reality was too dreadful to remember. It’s my duty to make you face the truth!

On the domestic front the other half continues to snuffle, cough and sneeze for Britain. I left him, pale and loitering, on the settee today and headed into town for anti-viral hand wipes, disinfectant and the like – although I suspect I may be shutting the stable door after the horse with man-flu has bolted.
Posted by Disco Del at 15:24