The face of evil? 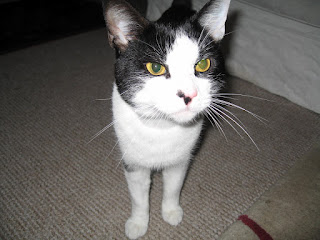 At the risk of sounding full of self-pity (me?), I’ve got enough to worry about at the moment without added palaver from within the Discombobulated household.

Nevertheless this morning Cyril, the three-legged cat, decided to cause me to have what my dad used to call ‘a set of jug handles’.

The reason for selecting a three-legged mog from the rescue centre last year was that we live near a Very Busy Road but have a small garden enclosed by high fences/walls. A cat with a missing corner we reasoned (foolishly) would be unlikely to attempt to make a bid for freedom. Especially seeing as the ungrateful blighter is allowed free access throughout the house, sleeps on our bed, has a diet of Sheba and Dreamies and is worshipped by me on a daily basis.

This morning, just after Cyril had been let out for his morning constitutional, he disappeared from the garden. This caused me horrible, horrible panic. I threw on a revolting selection of clothes (over my revolting jim-jams), chucked on my wellies and ran down the street screeching ‘Cyril … Cyril’ in an increasingly desperate wail as I headed nearer and nearer the Very Busy Road dreading what I might find. My other half meanwhile also quickly put clothes on over his pyjamas (only his jim-jams are from Fatface rather than Matalan, let us discuss the unfairness of that another time). He spotted the escaping mog in next door’s garden and called me back from my panicky search.

After much apologising to the neighbour (who was entirely gracious given that he was trying to get off to work) and general faffing about in the neighbour’s garden Cyril decided to launch himself at the fence and managed, in an extremely ungainly fashion, to get back home. Cyril is now only allowed supervised access to the garden. The other half is thinking of building a watch tower. I am collapsed in a heap, hyperventilating. Cyril is asleep on the sofa looking innocent. Where did I go wrong?