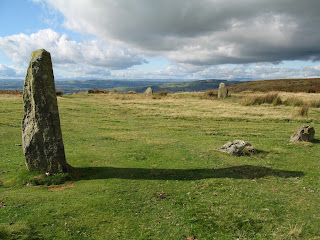 (Get it? This is Mitchells Fold, a stone circle in South Shropshire. If anyone tells me that standing stones are not the same as a stone circle and so my caption doesn’t work, I will throw a hissy fit – so don’t.)

Today was looking at wigs day. I went to the recommended hairdresser and was ushered through to the back room – very hush hush. I felt like I ought to be buying black market sausages or nylons or something. I expected a room full of wigs but it was mostly a room full of catalogues. And what catalogues. Some of the wigs were OK but there were an awful lot that would’ve gone down a storm with the cast of Crossroads. The deal was that I select three, they are ordered and if I don’t like any I don’t have them and we start again. This could run and run. The ones I chose (the non-Crossroads selection as I like to call it) should arrive at the hairdressers in seven to ten days. Seven to ten days! By that time I could be laid low due to chemo (although still no date for that) so it could be tricky. I’d better order some head scarves pronto. Anyway, the woman helping me was very nice having been through the whole yucky process herself umpteen years ago. By the way, did you know there is such a thing as wig shampoo? No, nor me, but now we are all a bit wiser.

While I was typing the above the other-half escaped to the barbers. He volunteered to have his hair clippings collected to start on his own version of a wig for me, also involving an old swimming cap and some chest hair (his not mine). Truly I am blessed.

This afternoon I went back to the GP. For drugs. By the time I write these blog posts (usually late afternoon/early evening) my mood has settled a bit, but I’m afraid that, due to anxiety, up until around 4pm I am a total, to use a medical expression, basket case. OK I may be overstating that a bit, but it’s fair to say that I am not the happiest of bunnies in the morning, as my poor put-upon other half would testify. While the GP came up with the goods – stronger prescriptions and instructions to mix them together and include alcohol if I like* (and no, the doc’s name is not Pete Docherty) his comments about how my anxiety was entirely justified given the seriousness of my situation did not exactly lessen my worry. Also he told me that the type of chemo I’m starting on is Big Serious Stuff and will probably make me feel truly grotty. I know I should appreciate his honesty (and I do, to a point) but sometimes I could do with more fluffiness and less reality. Almost every medical person I’ve seen since the start of this whole palaver has been to the Doc Martin school of reassurance.

Oh well, my first dark and stormy of the evening (dark rum and ginger beer for you lesser mortals not ‘in the know’ about Bermudian drinks – ta to Sister No 1 for introducing me) is going down a treat and my usual, happier evening-self is emerging, hurrah!

(* I should point that the doctor didn’t actually recommend mixing medication and boozing my socks off. He just said that the drugs wouldn’t interact with each other in a bad way and one or two alcoholic drinks wouldn’t be a problem.)