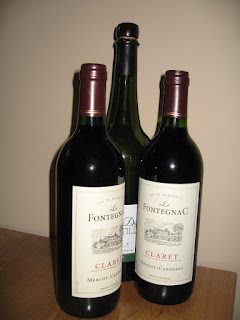 Oh alright – not all three bottles.

It was a back-to-the-hospital-day today, this time to see the oncologist for the first time. He looked about 7 years old but was absolutely the right mixture of straight talking/humour for me. So I’ll forgive him for reminding me of a non-blonde version of Dougie Howser. I shall call him the Anti-Dougie.

(For those too young or intellectual (yeah of course you are) to remember, Dougie Howser was a diabolical tv programme about a 16 year old genius who had been through medical school and was a practicing doctor as well as being a teenager. Vomit inducing as you can imagine.)

Anyway, back to my hospital appointment. The bottom line is that the Anti-Dougie firmly explained that secondary breast cancer (that’s breast cancer that has spread to another organ, lungs in my case) in incurable. The best I can hope for is that it can be controlled. He was unable to give me a prognosis as it depends on how I respond to treatment – I expect all of you to cross your fingers and toes for me on that one.

I’ll be starting chemotherapy in a couple of week (maybe sooner). I’ll have chemo three times (once every three weeks) and then have another CT scan to see if it’s having any effect. If it’s working then there’ll be more chemo with possibly a mastectomy and radiotherapy to follow. If it’s not working then they’ll try a different sort of chemo. Although the Anti-Dougie couldn’t/wouldn’t give a prognosis he declared himself “fairly optimistic”, which will do for the time being I suppose.

I have had some very helpful and kind messages from fellow cancer-sufferers and I intend to try to be as positive and feisty as they are – I particularly liked the message from a relative who is determined to die of over-use of alcohol and golf courses rather than boring old cancer. I’m with him – apart from the golf obviously. Golf – I ask you.

The other half managed to have an impressive coughing fit during the consultation which saw both the nurse and the Anti-Dougie running around getting him glasses of water and being generally concerned for him. Gawd, it’s all about him isn’t it!