A lovely surprise for me and a bitter disappointment for him 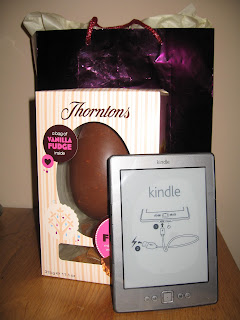 I visited a friend (and workmate) today and also saw, briefly, her little boy.  Her little boy was not impressed with me at all – and I’m not even bald yet!  Actually the poor little sausage had just woken up and I don’t think having a mad stranger looming over him was his idea of fun.

Anyway the daft herberts at work had got me a card and a very generous present – a Kindle, which I’ve no doubt will be really useful for long waits at hospital and also make for much easier reading in bed.  I’m delighted with it.  You shouldn’t have, but I’m glad you did.  Ta all!

They also got me an Easter egg.  When the other-half rang to arrange to collect me from my visit I told him I’d got a brilliant present and told him about the egg first.  This is not as bizarre as it sounds.  He has the type of chocolate addiction which really warrants some kind of intervention (if I cared enough to be bothered to stage one) but zero interest in technology.  I then told him about the Kindle and was surprised that he sounded quite keen.  When we got home and I unpacked the presents, he was devastated.  He’d misheard and was expecting me to unpack a bag full to overflowing with Kinder eggs.  He’s a strange one.

And now an update on the wacky, wacky world of hospital appointments.  After yesterday’s news that my first lot of chemo was scheduled two weeks later than promised I rang every one I could think of at the hospital who might be able to help.  I also shook my fist at the sky, walked around muttering and generally sulked.  Anyway, fingers crossed, some or all of my reactions seemed to have worked.  The nurse, oncologist and breast consultant are apparently teaming up to get my appointment moved forward.  I should (at the risk of tempting fate) be given a new and earlier appointment date on Monday.  Stay tuned.  Please.
Posted by Disco Del at 16:31