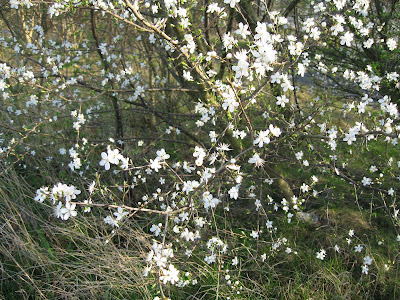 Hawthorn in blossom on today's walk 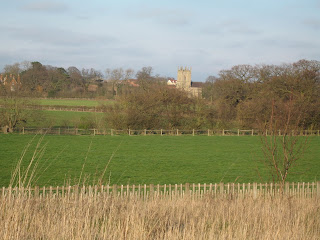 This afternoon, as the sun was shining and spring was in the air, we went for a walk round the scene of the Battle of Shrewsbury of 1403 (Can I resist saying ‘oh that's nearly five past two’?  No, obviously I can’t.)  We walked through fields to the Battlefield church.  It was all very lovely apart from the pylons at the start of the walk which were huge and crackling like crazy - not very atmospheric.

Anyway I reckon I walked about a mile and a half .  I feel a bit tired now but at least I got out and about in the sunshine for a while.  It was all very spring like, the blossom was out and the birdies were singing and most dog owners on the same walk even picked up their mutts’ poo (but not all of course).  Anyway we celebrated the lovely weather by strolling around a site where thousands of people had been killed in a bloody battle (albeit 600 years ago).

Talking of warfare, I’ve now reached peak possible infection time (when my blood count can be apparently at it’s lowest).  However I think I may be in greater danger of the other-half’s wrath.  I am constantly and unnecessarily reminding him to wash his hands after touching anything.  That noise you can hear is him grinding his teeth.