After yesterday’s escapade Cyril is now only allowed in the garden under supervision.  It’s a bit like letting a prisoner out in to the exercise yard (I’d imagine) with me as the vigilant, hard-hearted prison guard.  Brown fluffy cat, who is leading my poor innocent cat astray with his wild ways, was nowhere to be seen.  Which is just as well as, if he carries on being a bad influence, I may well turn him into a nice pair of furry gloves should I ever manage to get my mits on him.

I went out again today wigless (to the chemist to collect a prescription).  I’ve found that people are really nice to you when you’ve got a ‘cancer crop’.  Today I used it as an excuse to walk into a complete stranger’s garden to fuss her cat and dog (she made the mistake of smiling and saying ‘hello’ as I walked past).  Also the pharmacist was charm personified.  Goodness only knows how people will behave when I’m totally bald, probably hand me kittens and wads of cash.  Well, I can hope.

Eight months ago today the other-half and I got spliced.  Yeah, OK I know you don’t get anything for eight months, certainly not kittens and wads of cash.  And eight months is especially puny when you consider that the other-half’s twin brother and his wife celebrate their twenty-fifth anniversary this year.  However, I’m using it as an excuse to include the photo below and say thanks again to everyone who made it such a special day, particularly the other-half who made it completely unforgettable by getting my name wrong during his speech. 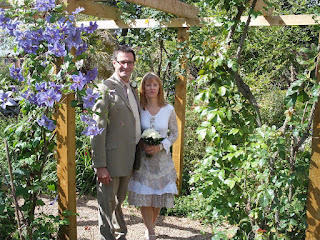