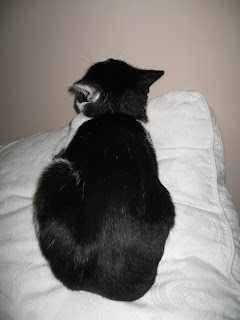 My last twenty-four hours have been so busy and tense I’m sure I could give Kiefer Sutherland a run for his money.

Firstly, last night, Cyril, the cat from hell (well Willenhall actually, but that’s pretty much the same thing, it’s even worse than Croydon) escaped again.  Only this time it was a proper Steve McQueen style escape (but with no motorbike, come on, he’s a cat).  Cyril was missing for five and a half hours.  This might sound wussy to those of you with cats that roam but Cyril, having only three legs and no road sense (hence the three legs) is supposed to be limited to the house and garden.  I was beside myself when he went AWOL.  I put leaflets through all the letter boxes in our road, the other-half and I toured the surrounding streets calling ‘Cyril’ until we were hoarse.  We were also shaking a box of cat biscuits – which gave us no luck in luring Cyril but saw us make friends with several other local cats who came to investigate.  We even met some new neighbours as we knocked on doors and asked to look in gardens.  The little monster turned up at 12.45am in our garden looking very pleased with himself.  He is now under strict house arrest until the fence improvements have been carried out.  He is not impressed.

This morning I went off to the hospital for my chemo pre-assessment appointment.  A lovely nurse explained all the completely unlovely possible side effects I might experience.  I’m torn between wanting chemo to start, as at least something will be being done to combat the shitty disease, and just being plain scared of the whole thing.  At this point of the day I quite wanted to do a Cyril and just jump over fences and run away from it all.  But I, unlike certain black and white cats, have a sense of responsibility and awareness of cause and effect (also I can't jump over fences).

This afternoon it was back to wig lady.  I’d chosen three possible wigs.  One was out of stock, one was completely horrendous and one looked pretty good.  The other-half came with me and said that the horrendous wig made me look like I was on the game.  I can’t think what sort of clientele that would have attracted though.  Is there a niche market for people who like scrawny middle-aged women wearing massive acrylic ginger wigs?  If so, don’t tell me, I’m happy in my innocence.

I had intended to have my hair cut short but the hairdresser would do no more than give me a chin length bob.  I think she probably just didn’t want me crying in her salon as she scalped me.  Anyway I’ve now got about four inches less hair then I did so that’s something I suppose.

Well, I’m off to spend my evening with a sulky cat, a new wig and an other-half designing a cat-proof fence.  Pah, that Kiefer Sutherland doesn’t know he’s born.
Posted by Disco Del at 20:26