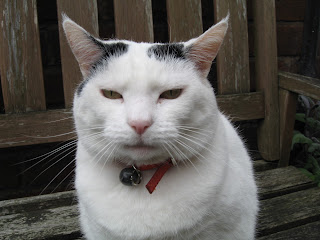 I don’t really have an appropriate photo for today.  So here is a picture of my old cat Nelly (sadly no longer with us) in a particularly disgruntled mood – much like my own.

To recap for those not paying attention (do keep up) I went to see the oncologist on 16th February.  Amongst assorted scary things, he told me that I should start chemotherapy within two weeks.  So I was not impressed, a few days ago, when the official date for the start of treatment came through for 15 March (IE four weeks after seeing the oncologist).  I contacted people at the hospital, who tried to move the appointment forward for me.  Today the nurse rang saying that they had been unable to improve on the appointment date and that the Chemo Dept had acknowledged that they had problems and that these problems had been brought to the attention of the hospital’s Chief Executive.  The nurse suggested I follow through on my threat to contact the Patient Advice & Liaison Service (otherwise known as PALS, there’s one at every hospital I think).  So I contacted PALS and also sent an email direct to the Chief Executive of the hospital.  No messing!

Yesterday at the lovely Haven in Hereford I’d been discussing ways to lower my anxiety levels.  Great, but after all this appointment hoo-haa, my anxiety reached peaks I never dreamed possible.  However, not all was lost.

Within one hour of contacting PALS and the Chief Executive I had a telephone call from the Chemo Dept bringing my appointment for the start of treatment forward to 5 March, an improvement of 10 days.  Now while I’m delighted with this improvement in date (actually I’m not sure ‘delighted’ is how I feel, but you know what I mean), it leaves me asking what happens to the people who aren’t prepared to kick up a stink?  I think we can all guess the answer to that one.  They probably get ignored.  As a friend of mine from Country Durham says (where they have an excellent turn of phrase) – it boils my
piss!

On a lighter note I had a welcome diversion this morning when one of the other-half's sisters, niece,  great-nephew and great-niece popped by.  It was great to see them all.  The great-nephew (age two and a half) took a shine to the cat ... it would be fair to say that the cat was not equally keen on making friends.
Posted by Disco Del at 17:26