The delights of middle-age

One of the nurses I've been speaking to recently as part of the whole cancer blah blah blah said that I was considered quite young to have contracted this shitty disease. She didn't say shitty. I invented that bit, but the bit about me being 'young' was true, honest.

I didn't like to puncture her balloon by telling her that never has middle-age suited someone as much as it does me. In fact I've made three exciting discoveries lately which I was too narrow-minded (ie young and foolish) to try before. I'll share them here in case someone hasn't yet tried them. Go on, have a go, you know you want to.

Cocoa - Proper cocoa mind. None of this sweet drinking chocolate nonsense. It's a bit like milky mud. I'm hardcore me - I don't add sugar at all but you can if you're a bit of a wuss.

Sherry - This stuff hits the spot. So far I've been having dinky glasses of it. But I'm tempted to say sod it and just stick a straw in the bottle and get on with it. It's like cough mixture with a kick. I recommend it.

And finally, and most shamefully:

Jigsaws - They're brilliant. What's not to like? Sorting
the straight edges from the c 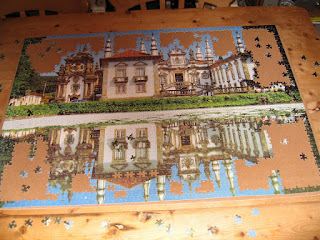 ompletely wiggly bits (you have to do the outline first or the four horsemen of the apocalypse will be released, everyone knows that), fending off the cat when he wants to sit on the puzzle (or worse still use the box with the as yet unsorted bits as a litter tray) or just snapping at your jigsaw companions (you know who you are) when they hoard the good bits and leave you to do the sky. And just in case you don't think I mean it, look - evidence of a work in progress. It's tricky, I mean it's got a reflection in a lake and everything. I thoroughly recommend hot jigsaw action.

There. Three things to change your lives. No need to thank me.