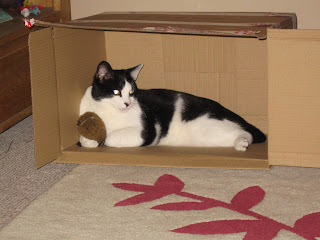 We went to Hereford today but forgot to take any photographs, so instead here’s a picture of Cyril in a cardboard box cuddling 'mousie' (which is much more interesting than Hereford, but more on that subject later).  The box originally contained a juicer – it’s huge and the instruction book is even bigger.  I’ll let you know when I’ve summoned up the energy to read the manual.

We went to Hereford so I could go to a place called The Haven .  The Haven provides free of charge help and advice to people with breast cancer and, going by my first visit, they are just the ticket.  I suppose it could be seen as a bit ‘fluffy’ but some soft niceness after the dourness of the medical staff I’ve been dealing with of late was very welcome.  The Haven’s services are very much something to do as well as the standard medical treatment but the atmosphere is, understandably, much more relaxed than a hospital and the staff have time to talk things through in detail.  So far so good.

Which is more than can be said of Hereford.  What a dump.  Yes, the Cathedral is lovely and it’s got the Mappi Mundi but the rest of the town is full of the same old boring chain stores you get everywhere and has quite a ‘run down’ feeling, which surprised me.  The other-half had three hours to kill there.  He went into one outdoor wear shop which was apparently ‘crap’ and then had a key cut.  He was overcome by excitement.  Truly, I am showing him the world.

And predictably enough, despite what I said in my last paragraph on Friday, the hospital has failed to contact me with a new date for starting chemo.  The battle will continue tomorrow.  Sigh.
Posted by Disco Del at 20:40

Email ThisBlogThis!Share to TwitterShare to FacebookShare to Pinterest
Labels: Hereford, juicer, The Haven