Off cheese and cheesed off

Do you know how long it is since I had a proper cup of tea?  (That’s milk, no sugar please).  Flipping ages that’s how long.  And I really, really want one.  It’s not that I don’t like the green, white and chamomile varieties but there are times, like first thing in the morning, when they just don’t hit the spot.  You just can’t smack your lips and go ‘aaah’ over a pot of raspberry leaves and wood shavings.

It’s not just tea either.  Since I was diagnosed with crappy cancer back in January I’ve been reading bits and pieces about diet and getting advice from people who are going through the shenanigans themselves.  I’m trying to take a balanced view and ignore some of the nuttier corners of the internet.  However, it seems that avoiding dairy might be a good idea.  So that’s what I’m trying to do.  I’m happy to have oat milk on my cereal but it doesn’t cut the mustard in a cuppa.  And dairy is in everything (nearly).  As a fellow dairy-avoider warned me ‘if it comes in a packet you can’t have it’.  It’s amazing how often the dreaded words ‘whey powder’ crop up in the list of ingredients.  And it’s not just hidden dairy.  Two of my most favourite things in the world are cheese and crème caramel – both now off the menu.

Red meat also seems to be a bit of a no-no, although I’m eating a small amount as I need to watch my blood count as a result of chemo.  Not eating red meat isn’t as difficult as the dairy thing because I was a cute-atarian for quite a few years.  A cute-atarian (copyright me) is a sort of vegetarian who avoids meat on a scale of cuteness.  So fluffy lambs, bouncy bunnies and bambi were avoided at all times.  Big eyed cows and lovely pigs also never used to pass my lips.  Chickens (not so cute) were eaten occasionally and fish (not remotely cute) were fair game.  This system does fall down a bit as if I followed it to the letter I should have been scoffing lots of snails and oysters (but you can take these things too far).

Anyway, no dairy and little red meat.  I’m a nightmare to cook for.  No wonder Sis no 1 ran off to Bermuda to get out of her meals on wheels duties.

Another reason why I’m cheesed off – I saw the oncologist yesterday.  A different one again this time (not the anti-Doogie sadly).  She was nice and informative, I’ve no complaints there.  It’s just that my CT scan showed no change since the last scan which was done two chemos ago.  Don’t get me wrong, no change is much, much better than growth or further spread of the cancer but, as the oncologist said, after the four chemos I’ve now had in total, the docs were really were hoping to see some shrinkage.  So I’m going to have a different sort of chemo from now on (Taxotere).  After two tries of the new swamp juice I will have another CT scan to see how things are going.  I may have to have a further two chemos after that.  I know all this scanning and treatment is better than the alternative but this chemo lark is getting a bit wearisome now.  Here’s hoping that Taxotere does the trick.

OK I’ve finished moaning for now.  Summer’s here!  We have had two warm days on the trot and my energy levels are heaps better.  We’ve been back to Country Garden Roses, a lovely nursery in Hadnall, and bought loads of plants ready for the new front garden (to be transformed from boring paving to floral idyl) .  It’s a lovely place to walk around at the best of times and even better when you come across a flopped out (and very chunky) cat in one of the greenhouses. 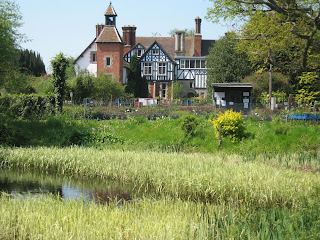 We’ve also been back to Attingham Park and checked out developments in the huge kitchen garden which included gorgeous borders and had a stroll around the grounds  looking at the general loveliness. 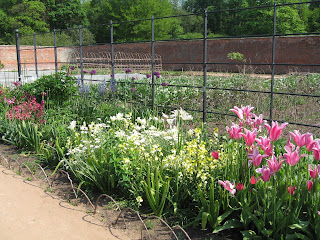 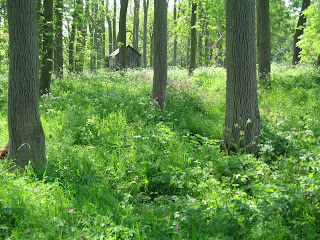 Finally you aren’t getting away without me including yet another photo of my three-legged mog.  Cyril loves the warm weather.  Just like the Country Garden Roses cat he loves to flop around in the sunshine too.  I think I might join him.