The duck of doom

As mentioned previously, we are currently staying at my sister’s house while the building work back at Discombobulated Towers goes on and on and on (more on this later).  This duck sits under the chair in the hall of my sister’s house and Cyril is terrified of it.  Don’t ask me why.  I never said he was very bright.  Anyway this fear at least gives my sister’s cat, Tuppence, a safe spot to sit where Cyril will not dare to attack.

I just googled ‘fear of ducks’ to see if it has a specific name.  Weirdly I can only find a name of the fear of being watched by a duck.  The world is strange.

The building work is progressing but has been delayed by the discovery of a lack of foundations, dodgy electrics and The Thorny Issue of The Cat Flap.  The new kitchen will be twice the size of the old one but still not exactly the biggest room in the world.  So finding space for cupboards, french windows and a cat flap has been problematic.  The builder, who has no sense of priorities felt that cupboards and doors were more important than cat access.  After we explained the importance of all things Cyril the builder sketched a variety of options on the kitchen wall and we have gone for the cat tunnel:

The electricians have offered to put a light in the tunnel.  I feel that they are not treating this matter as seriously as they ought.

To change the subject to my favourite thing, me, me, me I am now two thirds through radiotherapy.  Just one more week to go.  Here's a picture of the machine that does the zapping. 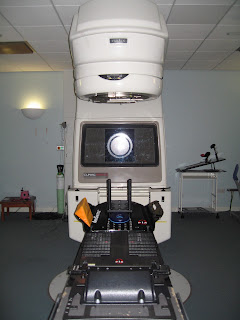 All I have to do is lie still and do nothing - something I'm very good at.