Hello lowly earthlings.  I have achieved enlightenment.  I am now serene and perfect.  Or, to put it another way, I’ve attended a one day course on meditation.  I’d like to be able to calm myself down when I’m having a major tiswas (without resorting to a sherry bottle and a straw) and thought I’d give meditation a go.  Major tiswases have been in short supply recently but the next couple of weeks will see me having a scan and a scary oncology appointment, so I expect to go into panicky mode as those days draw nearer.  Until then, as well as meditation, I’m also sticking my head in the sand and my bum in the air which works well in seeing off the gremlins and has the added bonus of being handy for anyone wanting to park a bike.

While I’m bragging about my worthy activities, I’ve also attended a secondary breast cancer day run by Breast Cancer Care.  It was a mixture of talks on all sorts of things (medical advances, likely treatments, fatigue, relaxation techniques etc).  It was great to have the chance to meet other people in same (leaky) boat as me (although I was, rather shallowly, distracted by how much one of my fellow attendees looked like Joan Plowright).  The info given was mostly useful although the five minutes spent doing ‘laughter therapy’, when you stand in a circle jiggling about and pretending to laugh, were some of the most excruciating in my life.  The absolutely most excruciating moments of my life were, even though you didn’t ask, the time, age 11, when I ran around the school swimming pool changing room in the nudey rudey suffering from concussion (having slipped and banged my head).  Luckily I do not have a photograph to illustrate this event.

Other than meditation and cancer stuff I’ve been out and about visiting friends, relatives and cats.  Sis no 1 has just adopted a cat from Shropshire Cat Rescue.  She (the as yet unnamed cat) is camera shy, so no photos of her yet but Sheldon, the kitten adopted by my sis-in-law, remains a total show-off and here exhibits how he needs neither meditation nor sherry to relax.  That cat could teach me a thing or two. 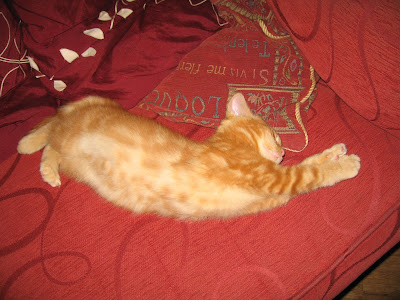