Since I last posted I’ve been trekking to and from Manchester for further tests and, yay, treatment at the Christie.


Before I go on, I should point out that the above picture of the other-half does not show him in his driving to Manchester outfit.  Thank God.  This was what he chose to wear to a recent stag do when, instead of going to the seaside or rampaging drunkenly on the unfortunate streets of Dublin or Prague, the stag party chose to spend a weekend living in the woods, building shelters, fires and, more than likely, whittling their woggles to their hearts’ content.  I know.


Anyway, the tests at the Christie came back OK and so last week I had my first dose of the trial chemo, SYD985.  No sooner had I had the chemo than I came down with the lurgy (a common or garden cold) so it’s very hard to say whether the resulting general grottiness and nosebleed were cold symptoms or chemo side effects.  I’m hoping for the former.  I was back at the Christie yesterday for a general check over and all seemed OK.  Of course it’s far too early to know if the chemo is working.  My breathlessness and coughing have continued so I’m just crossing all my digits and limbs and hoping for the best.


The one test that hasn’t been reported on yet is the lung biopsy.  This was to determine whether or not my cancer was still HER2+.  However, I was allowed to start the trial chemo without this result.


Gawd the biopsy!  I know other people have had a lung biopsy with absolutely no problem, so if anyone has got one ahead of them please don’t panic.  However, I had bleeding right at the end of the procedure which meant I spent about ten minutes coughing up blood while still lying on the CT scanner bed.  Not an experience I’d care to repeat.  The radiologist patted me on the back and congratulated me on not being a “panicker”.  I can assure you that had I been able to leap up and run around the room, flapping my arms, shouting ‘I don’t like it’, I must definitely would have done so.  Anyway, the medical staff remained completely calm while all the yuckiness was going on and I was able to go home later that day.  So I don’t think my experience was particularly alarming medically just personally.  I had been warned that bleeding was a possibility only, being a bit dim, I had assumed the bleeding would be external not internal.  What can I tell you?  I only scraped a ‘C’ grade in ‘O’ level biology and now you can see why.


All the staff at the Christie have been a joy.  I have had mixed experiences of medical bods over the years but this mob, so far, have been nothing but lovely and, most importantly, very generous with tea.


While I’m being nice about medical bods I saw my hospice clinical nurse specialist the other day (the Shropshire equivalent of a Macmillan nurse).  She was incredibly helpful.  So moves are underway now for me to get a blue badge, disability living allowance (or PIP as it’s now called), and a rented stair lift.  Don’t get me wrong, I hate that all these things are necessary but the relief at being able to park in disabled bays (less walking) and not toiling up my steep stairs which render me breathless for ages overrides any regret at the state of my health.


While I’m talking about depressing stuff I’ve also started the process of formally recording how much intervention I want in end of life care.  It’s not a subject I’m particularly relishing but I’d much rather have my wishes recorded rather than have any argy-bargy further down the line.


Oh dear.  A bit of a grim post I’m afraid.  But that’s how it is at the moment.  If anyone cares to join me in digit crossing for the effectiveness of the chemo please feel free.  All welcome!


And, for no reason whatsoever, I’ll leave you with a photo I took a few weeks ago of a neighbourhood mog.  My cat fixation remains undimmed. 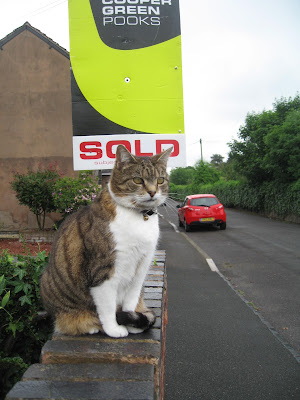