The other-half, Cyril (three-legged monster cat) and I have now been staying with sis no 1 for about six weeks as building work takes place back at Discombobulated Towers.  We are very grateful for this place of refuge but quite frankly it’s amazing we haven’t been evicted due to Cyril’s behaviour.  As well as intermittently bullying my sister’s cat, Tuppence, commandeering the best seats in the living room and demanding his share of the breakfast bacon, he has now taken up thievery.  Yesterday he got through a plastic bag and some cling film wrap to have a good nibble of my sister’s ham sandwich. As you can see from the picture below he is consumed with remorse and sleepless nights over the whole incident.

Meanwhile poor Tuppence has resorted to befriending the vacuum cleaner. 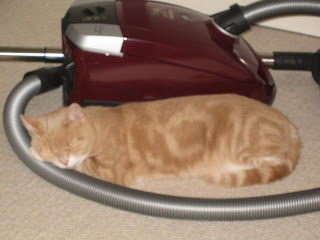 The end is in sight with the building work.  On the plus side the new room looks fantastic on the downside the kitchen fitter turned out to be completely fucking useless.  Sorry, but there really is no other way to put it.  I wouldn’t trust him with a lego set.  Anyway the work is being redone but, of course, this is yet another delay.

I’m also waiting to hear from the oncologist in Warwick.  I want to give the chap a chance but I will start chasing next week.  I’d really like to be on something to try to combat the buggers in my lungs.  I have started another hormone therapy, Letrozole (replaces tamoxifen in trying to block the oestrogen which my type of cancer loves).  It seems to be causing massive hot flushes (a small price to pay) which have even resulted to me standing around in the garden at night, flapping my dressing gown around like some kind of giant albino vampire bat.