There is talk of a distressing nature at Discombobulated Towers.  Talk of restraint, self-discipline and fortitude.  Talk of, wait for it, … putting the cat on a diet.  When we got Cyril (the three-legged monster cat) from the rescue centre last autumn he was sleek and slinky.  Now after nearly a year’s worth of pampering he’s got a paunch.  The vet commented on it a couple of weeks ago and I have to say it was quite noticeable yesterday lunch time when he was rolling around on the sofa sharing my ham sandwich.  I can’t think where I’m going wrong.  I don’t have a particularly good track record with this sort of thing.  My previous cat, Nelly, was ginormous (see above).  In my defence I have had other cats of normal build but they tended to have other problems of the type illustrated below. 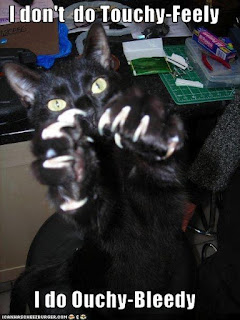 So it may be time to grasp the nettle before Cyril becomes a proper little porker.   Stand by for much wailing and gnashing of teeth.

Talking of wailing and gnashing of teeth this latest lot of chemo has been truly knackering.  I’m feeling better than I was a few days ago but the ‘bounce back’ from this type of chemo is much slower than from the previous type.  It is so frustrating to not be able to do anything without needing to lie down for ages afterwards.  Yesterday I was whinging so much about it that the other-half hoovered the house from top to bottom simply because he’d rather listen to the drone of the vacuum cleaner than the drone of my moaning.  Result!