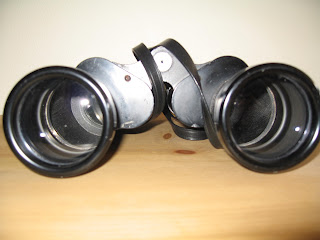 It was a quiet day here at Discombobulated Towers.  This afternoon I watched ‘Rear Window’ on TV (the Hitchcock film where, through his window, a wheelchair-bound James Stewart witnesses a murder in a flat across the way).  It was gripping stuff.  And it made me think … I bet some of my neighbours are up to no good, maybe committing murder and then transporting body parts across town in a suitcase (just like in the film).  So I’m stationing myself by the window binoculars at the ready.  Stand by for further reports.

Sis No 1 and Sis No 3 popped round with meals on wheels (scrummy curry) – hurrah.  Mind you they also tormented Cyril with an app which is basically a miaowing piano.  I’m probably going to have to take him for cat therapy to get over it.

Revolting news I forgot from Sunday:   The other-half was given a big Thorntons chocolate bunny (ta sis).  He took it out of its packaging and promptly dropped it on the floor. Whereupon a good half of it bounced into the cat's litter tray.  The other-half was distraught, only managing to save the legs, and when I say 'save' they still hit the floor - but he's not going to let a little thing like a million floor germs put him off.  In fact he did say that had the cat litter been fresh (it wasn't) he would've fished the rest of it out of the tray and eaten it too.  Classy.