Not for those of a nervous disposition

A word of warning, this blog post contains Too Much Information.  Read on at your peril.  However those of you brave enough to face the challenge will be rewarded with cat pictures at the end of the post, and where else on the internet will you get to see pictures of cats?

I really am quite wary about saying this but I am continuing to feel not-too-bad-at-all-thank-you-very-much, and that’s even after my third cycle of the trial chemo which I had last week.  Fingers crossed this continues. I walked into the town centre and back by myself today (a round trip of a couple of miles) something I haven’t felt well enough to do for five months.

Although I was very pleased to be able to undertake the arduous trek, the trip wasn’t entirely successful as I failed in my quest, which was to buy a sarong.  Silly, silly me.  It’s nearly August so, of course, the shops had all their new autumn stock in.  Great if you wanted a padded jacket or polo-neck jumper but crap if you wanted anything vaguely summery.

At the risk of really tempting fate and the evil cancer goblins I am toying with the idea of going on holiday and have been a reckless little devil and bought a post-mastectomy swim suit designed not to reveal lots of rubbery false boob.  I’ve even ordered a waterproof prosthesis in the unlikely event of me actually getting in the water.  As this will not be used very often (maybe less than once) I have bought the cheapest model on the market – could be a disaster in the making.  At the very least, given my utter uselessness at swimming, I’m hoping it might act as a flotation aid, although seeing as it’s just on the left-hand side I could end up swimming in circles.

The choice of mastectomy swimming costumes is (in my opinion) very 80s.  They all seem to have massively high cut legs (some sort of compensation for the wearers’ lack of bosom perhaps).  I’m not much of a one for tampering with nature and/or pain and/or itchiness and the idea of waxing anything anywhere (much less in the front bottom area) is enough to make me pass out.  However some sort of action will have to be taken as, when I tried the swimsuit on, it looked like Chewbacca was trying to escape.  To make matters worse, when I turned round and looked at my rear view in the mirror instead of seeing my bottom and legs there seemed to have been some sort of explosion in a mattress factory (probably due to my belief that ice cream is a major and vital food group).  Anyway I have solved all my swimsuit problems with the purchase (on-line) of an industrial strength sarong.

If you’ve got this far, well done.  You’ve read all I have to say (today) about false bosoms, hairiness in unmentionable places and out-of-control arses and, although you’re probably a bit green about the gills, you’ve lived to tell the tale.

Now your reward.  I went back to Shropshire Cat Rescue last week and look what I saw, heaven! 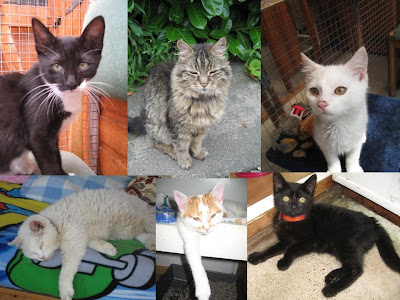