I saw Mr Oily (the oncologist) yesterday.  The appointment was both good and bad.

Let’s deal with the grot first.  A few days ago I found a new lump in more or less the same area as before.  Mr Oily says it’s a ‘thickening’ rather than a lump but it does need watching.  Hopefully it’s just scar tissue but there’s always the possibility it’s a new tumor.  I will add it to my list of things to worry about, probably a few notches above my concern about how to keep my new cream sofa clean when there’s a very dirty three-legged cat in the house.

I’ve been getting quite a lot of pain in my side, maybe due to the (possible) cancer in my ribs.  However, I have now been prescribed vast quantities of top strength co-codamol.  Hurrah for drugs.

On a happier note my blood tests and heart tests are all tickety-boo.  Mr Oily said that the flu-like side-effects I had after my first dose of the trial drug, TDM1, are pretty standard and now he is confident that this chemo doesn’t have an effect on the white blood cells, he advised me to take paracetamol as a matter of course for the first couple of days after treatment.  So hopefully, I won’t feel quite as vile after my next dose of new swamp juice next week.  I’ll let you know either way.  There is no escape.

Also, I think, maybe possibly touch wood, that my breathing has improved.  I’m certainly coughing less and the other day I walked to and from the supermarket (a 15 minute round trip), something I haven’t been able to do for ages.  Who’d have thought that going to the supermarket would ever be a cause for celebration? 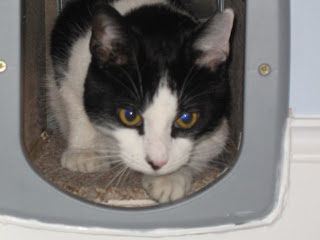 He comes and goes at all hours of the day and night and likes to mark his return home by miaowing incredibly loudly, often at around 3am, to let us know he’s home.  I’m wondering if I can fit him with a silencer.

My new kitchen is still a source of delight and wonder to me.  In fact I have just been sneaking my recycling into next door’s boxes (it’s kerb side collection day) as I don’t want to litter my lovely kitchen with recycling containers.  Not only do I think this marks me out as just a little bit bonkers but I also reckon I have lost any chance of a neighbour of the year award.