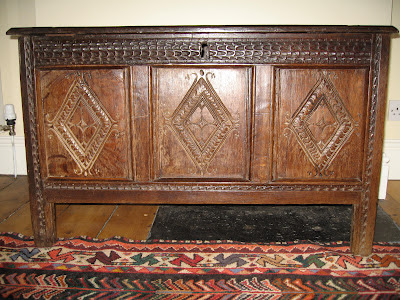 Phwoar look at my lovely chest!  I went to the local auction with the other-half and sisters nos 1 and 3 and came away with a late 17th century oak coffer.  I am chuffed.  Especially as it was a snip (less than a quarter of the price of something very similar in the Posh Antiques Shop, which I had been coveting for a long time).  It’s a little bit pongy (the other-half says it smells of old churches) so I’ve chucked a couple of lavender bags in it but I don’t really care as it is a thing of beauty and a joy forever.  Will I be as smug when I discover that it’s full of woodworm?  Probably not, but for now I am a happy bunny.

I've been up to all sorts over the last week.  I had a good poke around at the Reclamation Yard with the Very Big Dog (sadly no picture but he was HUGE, I'm talking Hound of the Baskervilles size).  I've been back yet again to The Plant Nursery with the Very Big Cat.  Below is a picture of said cat trying to cadge some of my sister's bacon sandwich by looking regal (it didn't work).

I’ve met up with pals and work colleagues R and D and caught up on all the gossip.  Had a lovely surprise present from L.  I’ve eaten out a couple of times and, joy of joys, had (a limited amount of) alcohol.  And, like everyone else in England, I’ve been rained on relentlessly.  At one point the other-half and I got absolutely soaked (I’d forgotten my brolly).  I, of course, was brave but the other-half moaned that, and I quote, “it’s raining down the back of my shirt and going into my knickers”.  My hero.

Cyril (my three-legged monster cat) has taken to waking me regularly at 5am.  Sister No 1 has taken pity on me and is looking after Cyril for a few nights so I can get some kip.  I pop round to see the cat (and my sister of course) regularly.  Cyril either runs away from me or ignores me.  So in revenge I'm including a recent photo of him looking quite portly and very daft.

So, all in all, apart from the weather and moody cats, it’s been a pretty good week.  More socialising is planned for this weekend in advance of the next round of chemo on Tuesday, after which my normal whinging will resume.  Bet you can’t wait.

P.S
Have you seen the website about the chap and his dog texting each other?  I think it's hilarious (but then I am a bit odd)
Posted by Disco Del at 18:53